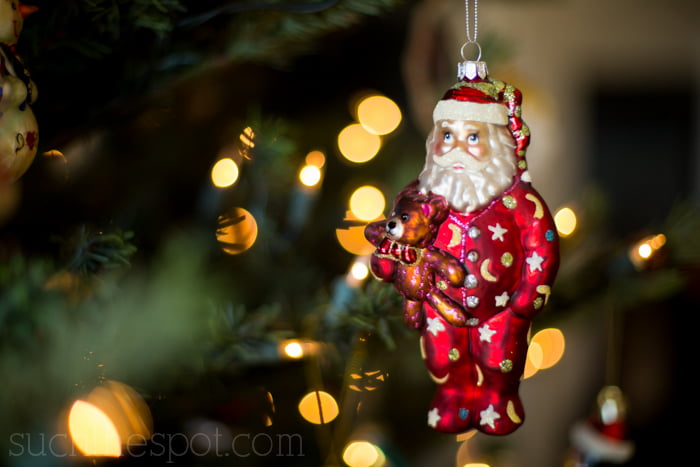 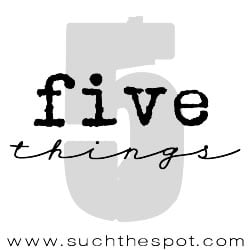 I love decorator Christmas trees. You know the ones–they feature perfectly-strung lights, themed ornaments and shimmery ribbons draped just so. Truly I love those kinds of Christmas trees, but I don’t have one. Our tree features neither ribbons nor themed ornaments. Our tree features a mish-mash of ornaments that have been accumulated over the years, each one with its own story. I thought it might be fun to share a few with you today. These particular ornaments aren’t necessarily the most beautiful or ornate ones that hang from our tree, but they are favorites because of the stories behind them. I hope you’ll come along with me for a virtual tour and a bit of storytelling.

I had a hard time with the photo, but if you have 20/20 eyesight and you look really closely, you might be able to see the teensy tiny ‘2005’ in red script at the bottom of this ornament. Every time I come upon it as we are decorating our tree I like to use this ornament as a bit of family trivia. Jeff and I got married in September of 2004, you see, and so a “First Christmas Together” ornament with a date of 2005 doesn’t seem to make any sense. But those with a sharp memory will recall that less than a month after we said I do, Jeff was deployed to Iraq. We spent our first Christmas as husband and wife very much apart–separated by 7,627 miles. Our first Christmas technically spent together came over a year after we were married, hence the 2005 ornament.

This is one of the first ornaments I remember buying as an adult. It was a gift for Torri. It was either 1998 or 1999, a time during which Torri was obsessed with the color purple. Not so much horses, but anything that shined and was purple was a jewel to her–including this ornament. I got it at Wal-Mart because that was all I could afford. Still, despite it’s monetary value, we go to great lengths to protect it, wrapping it in a double layer of bubble wrap each year. With Torri living on her own for the first Christmas ever, this ornament was a bittersweet one to hang this year. And yes, I still have it even though it was a gift to her. There will come a time when she is settled into a grown-up life and she’ll get this one to hang on her own tree. I hope that it will bring her as many warm memories as it does me.

This was a gift for Kennedy one year. Kennedy has a reputation for being the most styled sleeper ever. You know how some girls are obsessed with shoes? My Kennedy has a thing for pajamas. I used to have to ration her pajamas each week just to save myself an unnecessary laundry burden. For reals. Were it not for my intervention, she would routinely layer pajamas–one set on top of another–with a new look every night of the week. You can see, then, why this particular Santa was (and still is) fitting for her.

Ah, the Cracker Barrel ornament. It’s kind of a family joke. Where Torri was consumed by the color purple and Kennedy rocks some pajamas, Cassidy is all about the food. Always has been, and, I suspect, always will be (she comes by it quite naturally, I can assure you). On the night before she was born, we went out to Cracker Barrel for dinner. The next day would be Thanksgiving and I was prepared to spend it alone in Georgia; her father was scheduled to work a 24-hr shift and my extended family would all be gathered together at home in California. I braced myself for the sting of it, but Cassidy had other plans. Contractions started around midnight and by ten o’clock in the morning I had a new baby in my arms. That Thanksgiving would deliver instead the sting of a diagnosis I was anything but prepared for. Hindsight, of course, gives me a clearer perspective on why God chose Thanksgiving Day for me to birth this particular baby girl. Apparently He didn’t trust in my ability to read between the lines and so he had to be more blatant about it. In any case, the Cracker Barrel ornament on her little tree serves as a two-fold reminder of a turning point in my life. 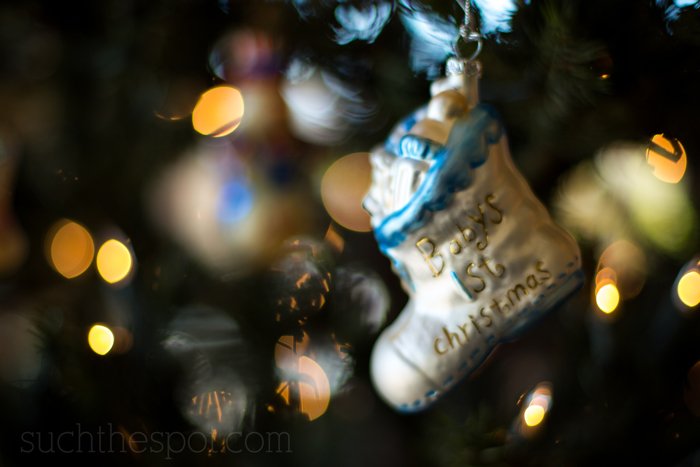 I could have really jinxed myself with this one. It was post-Christmas, 2005 and I was newly-pregnant. Having already birthed three lovely and beautiful daughters, I had my hopes pinned up on a boy. We were at Kohl’s and I spotted this Baby’s 1st Christmas ornament in blue on clearance for pennies. There was no year on it, so it would just as easily be appropriate for 2006 as 2005. The big ‘if’, of course, was the gender of our baby. We went ahead with the purchase on a hunch and–sure enough–it worked out.

So, there you have it–five ornaments that illustrate little stories in our lives. Since I’m kind of sappy when it comes to good stories, I’d really love it if you would share a photo of a special ornament that has meaning to you and the story behind it. All it takes is a cell phone and a few minutes! Share it on the Such the Spot Facebook page?

6 Replies to “5 Ornaments & their stories”