Right now, life in transition roars like static in my ears. It rushes in blurred streaks like cars on the freeway. It is neither here nor there but clustered in tight bunches, dotted across the map. Within upheaval there is the risk of certain memories fading and so I’m pressing an inconceivable pause button long enough to record the moments I don’t ever want to lose.

It was a Friday morning. I woke and went for a walk. By the time I returned, she was up and about, timing contractions. She let me rub clary sage essential oil on her ankles because (a) it is rumored to intensify contractions and (b) she couldn’t reach her ankles even if she tried. We were hopeful but unaware that God’s most perfect timing had already set the clock ticking. I drug that poor girl on walks–laps around and around. She stopped every so often, bent in discomfort and impatience. By late afternoon her boyfriend woke up after his overnight shift at work and joined in our laps. We two flanked the mom-to-be, timing the blessedly persistent contractions–though, I suppose, it depends on who you ask.

It was five o’clock when we arrived to the hospital. Even after a day’s worth of contractions she still wasn’t sure they’d keep her–too many near misses to pin hopes on. But keep her they did. One way or another, there would be a baby. Soon.

She was all smiles, drugged up not by anything intravenous but by anticipation alone. 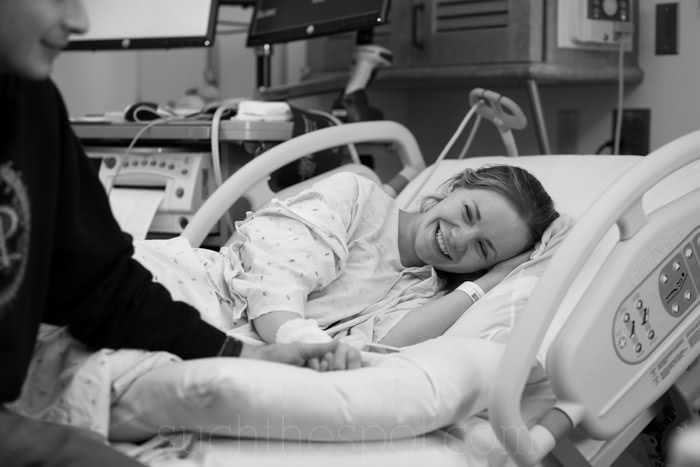 She requested a milkshake and snacked on french fries thoughtfully delivered by her boyfriend’s mom. But as the minutes ticked past, that smile gave way. 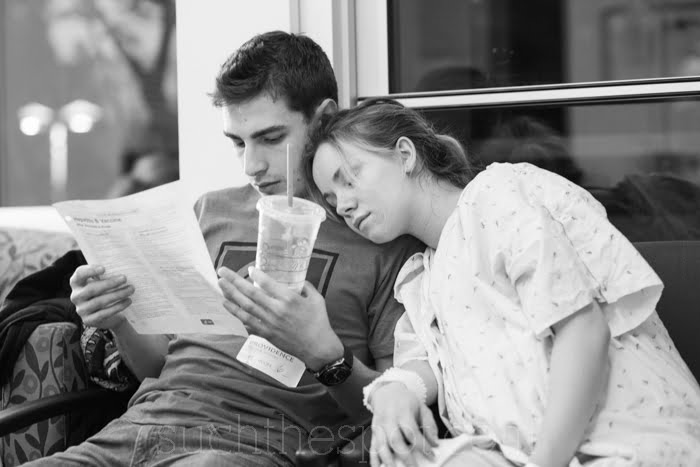 Don’t pull out your camera every time I have a contraction, Mom.  And so I changed my focus. 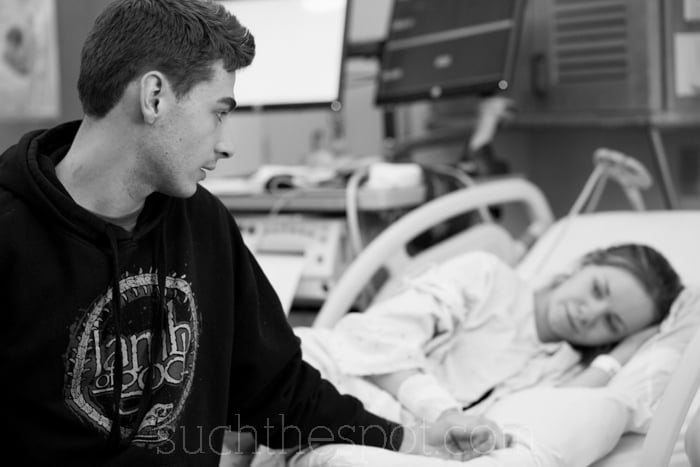 Maybe she would and maybe she wouldn’t but I think back and wish I had my own labor at least partially documented. 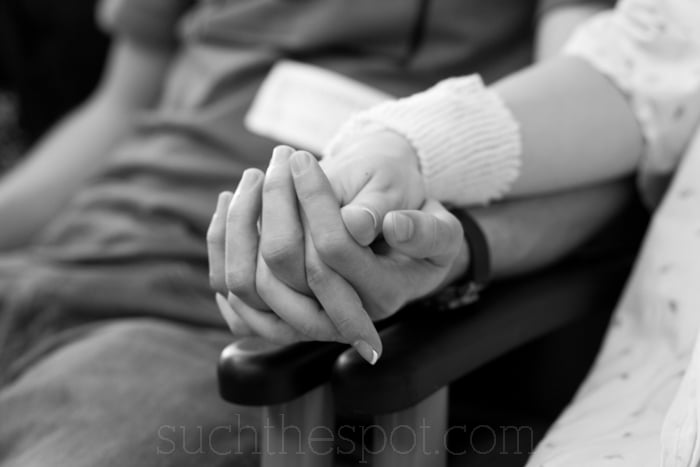 We coaxed her into the tub and while she was in there those cloyingly benign labor pains grotesquely transformed into white hot, betraying pain–the kind that makes one question her maker: how could you? 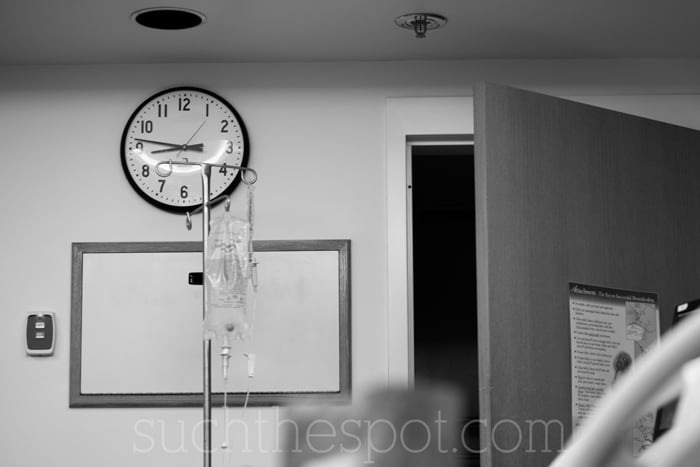 I sat just on the other side of the door and listened as she bawled tears that would fall and trail along a belly turned to stone by the rolling quake of contractions. So speckled a feeling for any mother to feel–a quiet, knowing hope tainted by so gripping a {grown} child’s imminent pain.

She set her will on a drug-free delivery. Out of obedience to so kind a midwife I went to my laboring daughter and gave blanket permission for her to change her mind–for her to acquiesce to the pain and lose herself in the warm glow of an epidural. But even in those fierce, biting moments she rooted into that iron will: resolute.

There was a whir of tears and moans and the Jenga stacking of commotion and then suddenly there was the business of pushing forth a baby.

She was in a bed, so wholly spent that her desperate, seeking eyes were unable to focus. Each time the seismograph of contractions declared it go time she drew from a well I never knew she had and curled tight around herself and bore down with all of her force and might and will. Only twenty minutes ticked by on the clock from start to end.

And then–easily the most miraculous event I’ve ever witnessed came to pass: there came life where none had been before.

I was so caught up in unspeakable awe that the camera around my neck was left dangling for a moment too long. But the midwife offered a gentle reminder and then there was this: 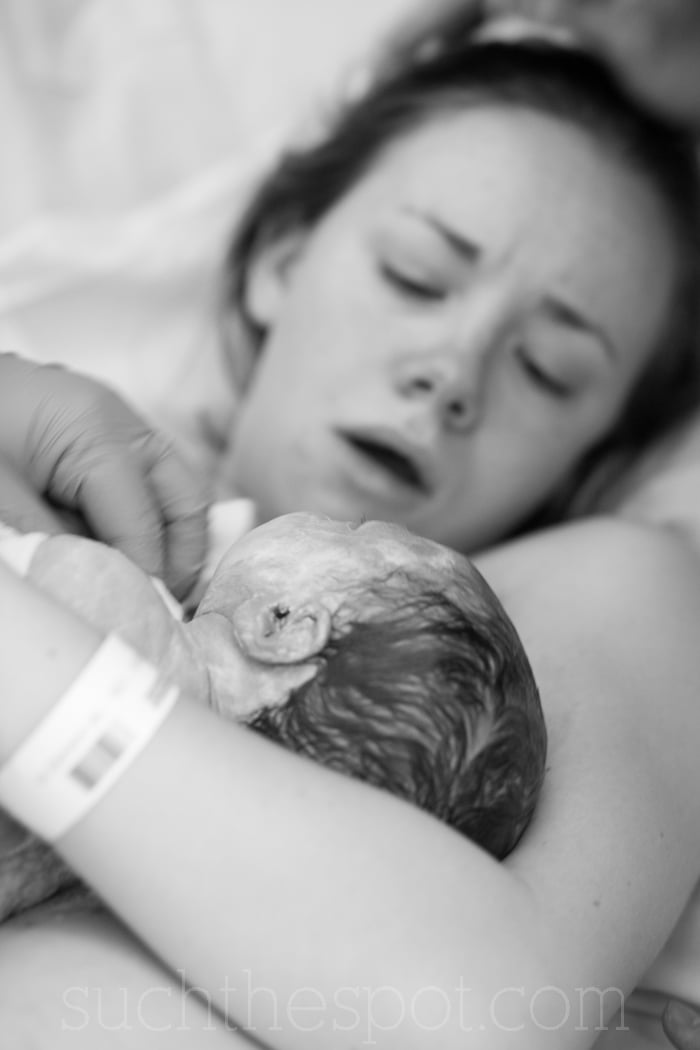 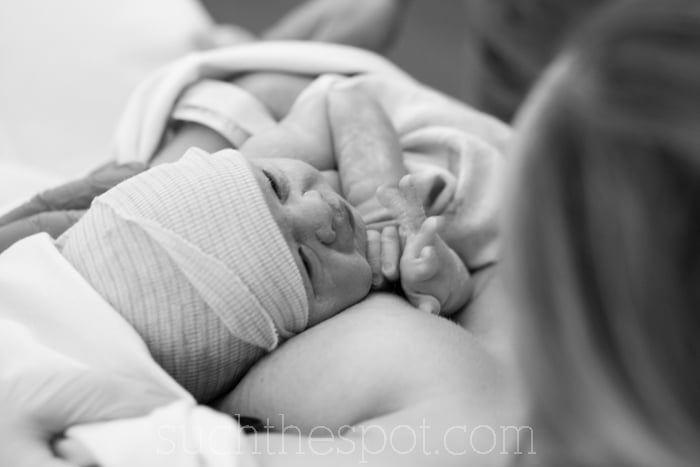 I didn’t stay long at the hospital so as to leave quiet space for a tiny family in the making. You know how people say that they “floated” here or there so as to convey total bliss? The wee hours of that Saturday morning mark the first time in my life that I remember feeling it myself–the floating from one place to the next. I floated to the car and I sat parked there for the longest time just trying to think through it all. There were a few tears and the deepest of sighs but more than anything else there was the most humble gratitude for what I had witnessed.

Pat Greene has a song called Poetry and there is a line within it that so perfectly captures the sentiment of that night: Of course we were created.

How could there be any doubt?

Now, somebody made every natural thing
From the soul, inside out to Saturn’s rings
How my baby smiles and how Ray Charles sings
Of course we were created
The clouds make rain, the ocean makes sand
The earth breathes fire, and lava makes land
Now that took a mighty hand
And a wild imagination